The best place to get deals, promotions and product announcements is on our Hot list! Sign Up Today!

FREE SHIPPING WITH ANY $99+ ORDER! SOME EXCLUSIONS APPLY.

The Lunker City Slug-Go is a revolutionary soft plastic that was the original creator of a generation known as Soft Stick baits. Its slender profile and erratic darting action broke new ground in the world of soft lures, exposing the effectiveness of having action that was imparted to be random in movement, and not repetitive as other lures before its time. The Slug-Go was originally designed for bass fishing, but soon became known to anglers of all gamefish around the world - both fresh and saltwater.

If for any reason you are not happy with your purchase, you have 14 days to return it unused, in its original packaging. Outlet Bait & Tackle will refund the total selling amount of the product returned, less any shipping. If products are returned without prior authorization (RMA) and/or in unacceptable condition, the customer will be billed for the shipping costs to return it back to them. Defective items can be returned for a refund within 45 days of purchase. Costs of defective items will only be refunded upon the store inspecting the defect. For ALL returns, please send an email including the product and quantity you wish to return to Customer Service to receive prior authorization.

The Slug-O has been around for a long time. It is similar to a Zoom Fluke, and excels in both open water and weeds/grass. Slight twitches of the rod tip cause it to dart unpredictably and fish just can't resist it. I like a 4/0 or 5/0 offset worm hook for these and I rig them weightless. Scurry it along the top or use it like a soft plastic jerk bait, you can't fish it wrong.

These are great. For years they’re my go to bait when nothing else seems to work. I always carry at least one “flashy” color and then a few neutral or natural colors to match the water n baitfish where I’m at. 👍🏻

these things are so skinny and thin that when I put it on a jig hook that has a bait keeper on it they split open. Probably would make a nice drop shot bait though when hooked through the nose.

Quailty product can't wait for striper season to open. Will be another arrow in my quiver 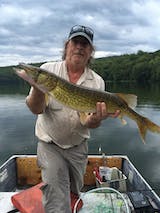